The comic world is changed: Much that once was is lost, for none now live who remember it.  Back in 1965 Stan Lee and Jack Kirby created the organization that IS SHIELD – in Strange Tales #135. The adventures, characters, stories and memories created by all resonate in everything that is Marvel.

But – this is OUR Agents of SHIELD. Where the stories have been delivered – true. Where the characters have made their mark, bared their souls, and made it finally – to the 136th episode, to deliver us their FINAL tales…

When the makers of “the past” are gone, how do you pick up the threads shared of an old life? How do you go on… when in your heart you begin to understand… there is no going back? Or IS there?

It’s time for The Agents of SHIELD Podcast – A TRULY COMPLETE, Detailed and Always-educational Review of each and every episode of Marvel’s Agents of SHIELD – we’re closing the door on an adventure started  as of this final recording – 2,519 days ago. This time, it’s Season 7, the Final Season, Episode 13, The Final Episode – What We’re Fighting For…

— What Comes Next? BE ON THE LOOK OUT

Season 7, Episode 7 “The Totally Excellent Adventures Of Mac And The D” 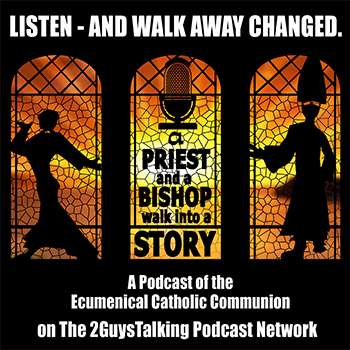 Francis Krebs and Rev. Jessica Gazzola of the Ecumenical Catholic Communion, and their guests – writers, scientists, artists, real people with real compelling stories. Our faith is always evolving and “A Priest and a Bishop Walk into a Story” will touch your heart so you too will – walk away changed.